AARP recognizes anyone over 50 for its membership so this group is for those 50 and older. We can explore ideas to lobby senior organizations for support. 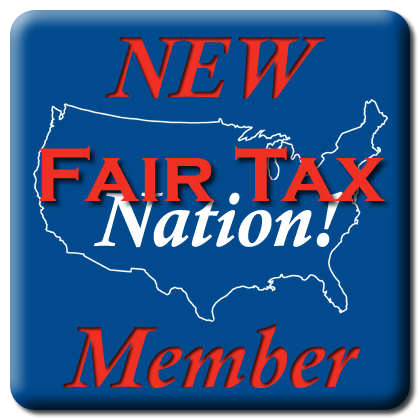 How we all benefit through the Grass Roots Freedom Ride (GRFR) promoted at FairTax.org (AFFT)

You need to be a member of Seniors for Fair Tax to add comments!

After watching "UNFAIR" I had no idea what the IRS is doing to shut down America.  I believe the old expression about they came for your group, but it didn't concern me, so I did nothing.  Well they are running out of conservatives, so you may be the next group.  We need to shut down the IRS.  If you have children and grandchildren you should be concerned.

Comment by Billie on November 5, 2010 at 11:26am
Come on folks, please comment on this page. We need your help to keep FairTax on the front burner.

Comment by Marco "Mike" Billante on October 26, 2010 at 12:04pm
As an addition to Billie's list, you could consider volunteering for a couple of hours anytime a group has a booth or table at a local event. We had an event this past Saturday where the majority of the attendees were NOT Conservative. Had we had more FairTax advocates present, we could have reached out to many more than what we did. As it was, we actually had many lively conversations with some signing on after they understood the FairTax Plan.

Comment by Bob Whigham on October 26, 2010 at 7:43am
Billie, love your "The Grey-Haired Brigade" post. Eloquent and succinct. Thank you.

Comment by Billie on October 26, 2010 at 5:40am
What are you doing for FairTax?
1. Attending meetings?
2. Talking to people to see if they are know about FairTax?
3. Asking people to join FairTaxNation.com?
4. Asking members to join the groups?
5. Putting your events on FairTaxNation?
6.
Please add what you are doing to my list.

They like to refer to us as senior citizens, old fogies, geezers, and in some cases dinosaurs. Some of us are "baby boomers" getting ready to retire. Others have been retired for some time. We walk a little slower these days and our eyes and hearing are not what they once were.
We have worked hard, raised our children, worshipped our God and grown old together. Yes, we are the ones some refer to as being over the hill and that is probably true.

But before writing us off completely, there are a few things that need to be taken into consideration. In school we studied English, history, math, and science which enabled us to lead America into the technological age.

Most of us remember what outhouses were, many of us with firsthand experience. We remember the days of telephone party-lines, 25 cent gasoline, and milk and ice being delivered to our homes. For those of you who don't know what an icebox is, today they are electric and referred to as refrigerators. A few even remember when cars were started with a crank. Yes, we lived those days.

We are probably considered old fashioned and out-dated by many. But there are a few things you need to remember before completely writing us off. We won World War II and fought in Korea and Viet Nam. We can quote the pledge of allegiance, and know where to place our hand while doing so. We wore the uniform of our country with pride and lost many friends on the battlefield. We didn't fight for the Socialist States of America, we fought for the "Land of the Free and the Home of the Brave." We wore different uniforms but carried the same flag. We know the words to the Star Spangle Banner, America, and America the Beautiful by heart, and you may even see some tears running down our cheeks as we sing. We have lived what many of you have only read about in history books and we feel no obligation to apologize to anyone for America.

Yes, we are old and slow these days but rest assured, we have at least one good fight left in us. We have loved this country, fought for it, and died for it, and now we are going to save it. It is our country and nobody is going to take it away from us. We took oaths to defend America against all enemies, foreign and domestic, and that is an oath we plan to keep. There are those who want to destroy this land we love but, like our founders, there is no way we are going to remain silent.

It was the young people of this nation who elected Obama and the Democratic congress. You fell for the "Hope and change" which in reality was nothing but "Hype and lies." You have tasted socialism and seen evil face to face, and have found you don't like it after all.

You make a lot of noise but most are all too interested in their careers or "Climbing the social ladder" to be involved in such mundane things as patriotism and voting.

Many of those who fell for the "great lie" in 2008 are now having buyer's remorse. With all the education we gave you, you didn't have sense enough to see through the lies and instead drank the kool-aid. Now you're paying the price and complaining about it.

No jobs, lost mortgages, higher taxes, and less freedom. This is what you voted for and this is what you got. We entrusted you with the Torch of Liberty and you traded it for a paycheck and a fancy house.

Well, don't worry youngsters, the Grey Haired Brigade is here, and next month we are going to take back our nation. We may drive a little slower than you would like but we get where we're going, and in November we're going to the polls by the millions. This land does not belong to the man in the White House or to Nancy Pelosi and Harry Reid. It belongs to "We the People", and "We the People" plan to reclaim our land and our freedom. We hope this time you will do a better job of preserving it and passing it along to our grandchildren.

So the next time you have the chance to say the Pledge of Allegiance, stand up, put your hand over your heart, honor our country, and thank God for the old geezers of the "Grey-Haired Brigade."

Comment by Billie on January 15, 2010 at 9:02am
HI Seniors are you as upset as I am about NOT getting a cost of living on our Social Security? Did you see were the Congress and the Federal Workers got a big pay increase? I don't think they have heard us! What are you doing about this?? Billie

Comment by Nancy L. Gatchel on July 31, 2009 at 12:37pm
RE: LIBER-TEA PARTY tomorrow: All tables will be marked for specific groups. Meet @ FairTax table. Volunteers needed to pass out Fair Tax fliers & get petitions signed, etc.

Comment by Billie on July 29, 2009 at 3:52am
Thanks Dave, I have joined another group and ask their views/concerns about FairTax. Billie