Where do we go from here

For my part, I am continuing participation in our local FairTax group, including passing out literature at fairs and rallies; writing and visiting representatives, and speaking at various groups. I am also active in our local Liberty Group/Tea Party as a FairTax supporter, speaking to these groups about the FairTax. I have also joined a group of mostly small business owners which has the aim of taking back the Republican Party for conservatives. Educating these people about the FairTax and… Continue

Where do we go from here?

Thank you to all of the many volunteers who donated their time, talents and money to make all of the FairTax events below possible!

Be ready to talk about the FairTax

You have probably been getting updates from AFFT in Houston regarding the big media and membership push. Once this gets going we will not stop until the FairTax is the law of the land. This campaign will kick off as soon as they finish the fundraising necessary, which should be very soon. Perhaps a month or less.

We have to be ready at the grassroots level. We need to take an inventory, so to speak, of those among us who are willing to be speakers at meetings and gatherings. As the… Continue

What if someone could make a movie about the Fair Tax? A documentary or something like that? Maybe we could get somebody like Michael Moore to get in on it. He has made some great documentaries, like "Fahrenheit 911", etc. A movie would certainly publicize it like nothing else could. People love movies and will pay to see one. Imagine the headline in the movie section of newspapers saying something like: "See the latest movie about the greatest thing to ever… Continue


It is wrong for the government to deny rights of seniors solely on the basis of their age; equally wrong for juniors, sophomores, and freshmen.

There is no principled reason to deny adults the right to choose for themselves whether to drink alcohol or not. This is a matter of personal preference and belief.

As some of our constituents knows I made a last minute decision to go to Washington for 9-11 and the 9-12 March. Let me start on 9-11 and the events that happened. As I write this blog I want to include what was discussed in a two hour closed door meeting in a Congressional Office. I want you to know that all Legislators where "out of town".

9-11 Patriots of FairTax Day in Washington

We had rode all night on a charter bus to Washington from north Georgia, arriving near… Continue

Steve Forbes and Dick Armey are pushing the Flat tax as hard as they can. I have been posting the following on as many of their comment pages as I have time for. Perhaps others can comment that they agree with this post. \
The flat tax and the FairTax share some important similarities. They are both flat-rate taxes that are neutral with respect to savings and investment. The flat tax, however, retains the invasive income tax administration apparatus and can easily revert to a graduated,… Continue 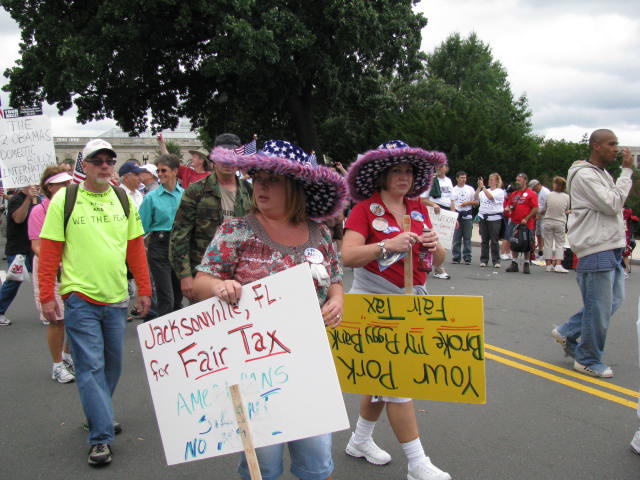 Ive been following the recent ACORN scandal where two journalists posed as a pimp and prostitute and went into an ACORN office in Baltimore trying to get tax information on a fake buisness, etc.. Now as most of us are well aware, ACORN has not gone unnoticed of their fishy and criminal behavior in the recent past, so i was not greatly surprised at what i saw and heard. The issue that has been bothering me is that the different people in the media who have been covering this, not one has… Continue

The sunny summer weather we have been enjoying as the kids go back to school is going to be replaced by clouds and rain as we look forward to The 9-12 March On DC so pack your rain gear so you will be comfortable while you are making your representatives uncomfortable, especially if you are going to be travelling in your camper and planning on Wal*Marting overnight.

Civil attorneys have destroyed entire industries in America. The small aircraft industry does not exist in America today because of civil suits. The country that was the first to venture into the sky and pioneered the aircraft industry was sued out of existence by trial lawyers. In the early 1980’s the last remaining small aircraft manufacturer closed its doors and left America. Anyone who has ventured into the business world in… Continue

Thou Shall Not Steal

There are only two ways to get the money to pay for government: either tax Americans who are living, or steal it from generations of Americans not born yet.

Deficit spending is stealing from future generations; in the fiscal year coming to a close this month, we have stolen nearly $2 trillion more of their money, and Congress will take another heaping helping when they pass the 2010 appropriations… Continue

OBAMA-CARE AKA HR3200 is closer to becoming a reality than most Americans realize. They are going to use the Camel’s nose under the tent approach! This is a method in politics that has been used since the beginning of the Progressive Era that started with Teddy Roosevelt (Republican) and Woodrow Wilson (Democrat) at the turn of the twentieth century.

The scheme goes like this; they say that they are abandoning the public option and then proceed with a provision that says that if the… Continue

FairTax to Launch National Multimedia Campaign for Passage in Congress

FairTax to Launch National Multimedia Campaign for Passage in Congress

We have exciting news: The Americans For Fair Taxation Board has authorized the launch of a coordinated multimedia campaign for passage of the FairTax in the U. S. Congress.

In announcing the campaign launch, FairTax Chairman Leo Linbeck declared that, “Never in our lifetimes has our country more badly needed the economic boom and the immediate and robust creation of private sector jobs up and down the… Continue

Commercial_1.mp3
Please share this with all of your friends and family. Be Listening for this commercial on radio stations in your area!

I wrote an earlier article challenging the American people to employ economic sanctions against the federal government, for the purpose of sending a message to Washington that the American people are not going to stand by and do nothing while their country is bankrupted and destroyed by the Congress and this administration. I received quite a few replies from people who were concerned that we may also hurt our local economies and our neighbors in the process. No major battle can be fought… Continue

GOOOH.com can get the FairTax done

Why is GOOOH.com important to the FairTaxers? Because 80% of GOOOH supporters say they would vote FOR the FairTax if they were in Congress. This is a viable plan to take back our country and enact the FairTax!!!

This is written by Tim Cox, creator of GOOOH.com, and posted here by Laura McCue

Did you see the latest Rasmussen poll? A mere 25% of voters nationwide, when asked if they would keep or replace the entire… Continue