You can also use our quick widget at;…

The new HHS poverty level thresholds were just released and those changes are now reflected in the FairTax Calculator. This year, HHS threw us a curve, but it was…

I had the good fortune to be selected to ask the only question for Mark Levin from the overflow crowd at this event at the Reagan Library on Sunday, August 16. My question is at about minute 41 and I think you will be pleased to hear Mark Levin's answer to my FAIRtax question. Lecture and Book…

FairTaxers, how many times have you been asked by someone you are talking to about the FairTax, "What would my FairTax rate be?" I get it a lot. That's why I created the FairTax Rate and Real Dollar Calculator. It's a Flash web-widget that can be embedded on any site that you control (I.e. that will allow either "embed" or "object" code).

I've been a member of FairTax since its debut in 1995.  Immediately prior to that I was a member of CATS for several years.  Citizens for Alternative Tax System. The last CATS meeting I attended was in 1994 I believe, at Ohio State University in Columbus, Ohio.  The event featured two Congressional leaders debating the issue of Income tax Reform.

Congressman Dick Armey of Texas was pushing a FLAT TAX. Congressman Billy Tauzin of Louisiana was in…

We can stand for something, or we will fall for anything!!

To participate it is necessary to pre-register at this web link:

Watch for a confirmation email with instructions for logging on

Without the FairTax Friday newsletter carrying the webinar announcements, I am relying on you to spread the word of the monthly webinar.

Thursday's SPECIAL TOPIC: "78 Economic Experts Who Support the FairTax".  You must register in advance…

We met with folks from all over the U.S. and around the world.  We hope to begin a "chain reaction" of PopVox polling stations across the country!  Go to…

in response to a blog by Bruce Robertson on November 15, 2010

Wow, I just found your blog post and am in agreement with your views. I also feel that a phase-in of the Fair Tax rate over a 10 year period, corresponded to an incremental decrease to our tax code liability would be in the best interests both the Fed and society. This will provide real numbers per… 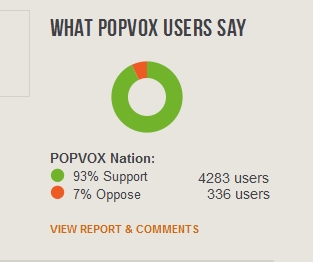 More reason for the Fair Tax!

Couple in California finds $10M worth of gold coins on their property. The IRS wants their "fair" share. Their claim is the money did not belong to the couple because they didn't know it was on their property. Therefore it is found money and therefore taxable. Plus, they don't tax the face value of the coins, they want "fair market" value. Now, in order to keep the coins, should they wish, they will need to come up with $4m just to maintain ownership.

The Pure Insanity that is the IRS

This is often overlooked by citizens that don't question the reality that is right in front of there noses. This reality is that we control the government not the contrary. We do this with our voices, our participation and our vote. Take a little time to ponder this video before asking yourself how did it get this insane.

Hello everyone. Thanks for the big welcome! This is my first blog. I hope I click the right buttons. Today's post - My favorite economist is Thomas Sowell.  Check him out at tsowell.com

Hello everyone. Thanks for the big welcome!

This is my first blog. I hope I click the right buttons.

Check him out at tsowell.com