Inspiration for continuing the fight

I believe this came from an old analysis of what challenges and rewards passing the FairTax would bring and it encouraged me.

"Success will mean the passage of the single most significant domestic policy act since the income tax itself was passed in 1913... The political legacy of taking on the federal income tax is hard to overstate. It is perhaps the most reviled law in the country, and to do battle with it in a bold, sweeping fashion will be a landmark event, showing extraordinary… Continue

Altered Markets create mega-orgs that are "Too Big to Fail"... FairTax corrects this!

I follow the stocks... too closely... and, it isn't pretty. Many of the companies that are tanking the market are mega-orgs - some of which are too big to fail. At least that's what we are told.


P.S. We've sent as many folks over as we can find!

Whether flying a plane or heading the CIA, it's best to have someone with experience

By Ron Martz
(from the blog: http://justthewriteword.blogspot.com)

The arguments being offered in support of President-elect Barack Obama's choice of Leon Panetta to be CIA director are laughably disingenuous at best and downright scary at worst.

Panetta is the former White House chief of staff under Bill Clinton, a former Congressman from California, and a certified policy wonk. Obama has decided that this aging remnant from a previous administration is the best… Continue

HR 25 In The New Congress, By Aaron Schutte:

FairTax leaders, As you know The FairTax Act of 2009 was introduced to Congress again as HR 25. Our thanks to Congressman Linder’s office for that and we’re still waiting to see what the Senate bill will be. It was very encouraging to see a record number of original co-sponsors and others sign on even since then. Some emails have already gone out about the sunset language at the end of the new bill (Section 401) and we expect that portion to ease some… Continue

Are there any events or mettings in the future in my area that I can catch a ride to?

Send me your Fairtax News

Do you have great Fairtax news in your state? Send me the link and I will talk about at http://FairtaxFigthClub.com

Tell the Obama team to support the Fair Tax

With having posted on the Obama website, change.gov, I just received an email with more ways to give ideas to him.

From the email:
We wanted to tell you about a new feature on Change.gov which lets you bring your ideas directly to the President.

It's called the Citizen's Briefing Book, and it's an online forum where you can share your ideas, and rate or offer comments on the ideas of others.

This link is from searching for Fair Tax on the… Continue

Thoughts on class warfare from a segment I heard on the Michael Medved show...

On my way to pick up my son from preschool, I heard a segment on the Michael Medved show where the caller was really tweeked that he got paid $8/hour for caring for the elderly while the auto workers were making $75/hr (probably inclusive of union dues - I just don't know).

A comment I left in responise to the IOUSA news story on www.pgpf.org

While watching IOUSA on CNN I went to www.pgpf.org and found the story of the CNN airing.

The FairTax would do much to help solve the debt problem.

Injunction (meant to say in conjunction) with many of the approaches that this foundation recommends, the FairTax could be a big part of the solution to get our nation's… Continue

A quote, "If members of Congress have good ideas, if they can identify a project for me that will create jobs in an efficient way that does not hamper our ability over the long term to get control of our deficit, that is good for the economy, then I'm going to accept it," the president-elect said.

Have all our Congress people got emails from us, YET? Mine have. Both my Senators, olus my Congressman. One of my Senators, informed me she was not on the Senate Finance Committe, several… Continue


When I sat down to write this post I had been anguishing over it for months. Some gnawing or yearning I should address. Maybe, in some way I figured it would be cathartic. Heaven only knows if it would make any kind of difference in the world. You know, vent a little.
When I started writing I became even more unsettled because now I had to think about what I was putting down. I found myself shaking my head at the insanity of slavery politics. Part of my anguish is… Continue

Talk to the Convention

Talk to the Convention

I happened to see an old black and white movie the other night. Jimmy Stewart played a gentle slightly “touched” and lovable man who had an invisible friend, a magical six foot tall, talking rabbit named Harvey.
There was a line from the movie where Mr. Stewart's character stated and I am paraphrasing “My mother told me...some people are cleaver and some are pleasant. I choose to be pleasant, Oh, so pleasant.”
I don’t think pleasantness has ever been… Continue

CNN to Broadcast I.O.U.S.A. The public has spoken, and we've listened. In response to demand for information about our country's financial challenges, CNN/U.S. will air the broadcast premiere of the acclaimed documentary I.O.U.S.A. on on Saturday, January 10 at 2:00 p.m. EST and on Sunday, January 11 at 3:00 p.m. EST. Accompanying the documentary will be an unscripted panel discussion with policy leaders about various economic solutions… Continue

No $800b bail-out. Please implement the FairTax instead!

The solution is to put full faith and support behind the good, innovative, and hard-working people of this great nation. When we have freedom from the excess… Continue

Motorcycle Enthusiasts “Make Some Noise” on the Road to Economic Freedom 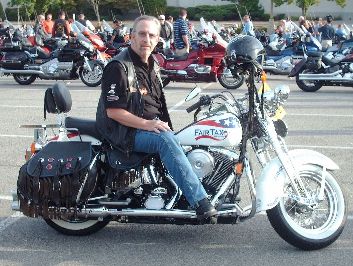 Horse Shoe, NC – Combining his love of freedom on a motorcycle and support for economic freedom through the FairTax bill in congress, Mike McLean launched his website to raise funds and awareness for grass roots FairTax groups throughout the nation. WWW.Grassrootsfreedomride.com offers all FairTax groups fund raising capabilities through… Continue

What FairTax Nation is All About: All Please Read.

First off, you may wondering "What is FairTaxNation.ning.com" ? FairTax Nation is a brand new weapon in our arsenal for FairTax grass roots to use. I believe it will prove to be the biggest tool we have to promote the FairTax Act in 2009.

As a continuously growing On Line Petition and organizational tool, we can coordinate FairTax promoting events across the state or across the entire country including Washington DC.… Continue

Herman Cain of WSB Atlanta is also a STRONG proponent of replacing the Tax Code with the FairTax and has started a grassroots movement of taking our Government back from the politicians that have consistantly eroded everything this Country was founded on. (In just two hours, he had over 3,000 people signed up.) It would be a wise move for all FairTaxers to join this movement as well. If all the FairTax groups were to join as one, we would have a very powerful voice; right now there is Zap the… Continue

My reply to Clarence Page on the McLaughlin Group

Thank you, Marilyn Rickert, for alerting Fair Tax supporters to this broadcast. Here is my letter to the McLaughlin Group sent to comments@mclaughlin.com.
~Jim

Dear Sir,
I was puzzled by the comment of Clarence Page on December 27, 2008, during an airing of the McLaughlin Group, that he thinks the Fair Tax merits an award for the most stagnant idea. If Page's idea of a dynamic code is today's living breathing Leviathan, with over… Continue