Congressman Jeb Hensarling (R-TX), Congressman Mike Pence (R-IN) and Congressman John Campbell (R-CA): Over the last five years, federal spending increased from nearly 20 percent as a share of the economy to 24.7 percent as the government’s expenditures grew from $2.47 trillion to $3.52 trillion—a 42 percent increase. These are the highest levels of spending as a share of the economy since World War II. Such high levels of spending have seriously worsened federal budget deficits, which have grown from $318.3 billion in 2005 to $1.4 trillion in 2009. And with such borrowing, the national debt has ballooned, growing from $7.3 trillion to $11.9 trillion—a five-year increase equal to the nation’s entire accumulation of debt from the presidencies of George Washington to Bill Clinton.

These levels of spending and borrowing are economically unsustainable, but unfortunately, the fiscal situation is only getting worse. By 2036, three entitlement programs will consume all of federal revenue, and public debt will reach 200 percent of the total economy by 2038, according to CBO. This will invariably lead to higher taxes, a lower standard of living, and weakened national security for generations to come. If runaway spending and borrowing continues unchecked, this generation will be the first to mortgage away the future prosperity of its children and grandchildren.


The Solution
The Spending Limit Amendment (SLA) to the Constitution of the United States would ensure that federal spending cannot grow faster than a family’s ability to pay for it. The Amendment would limit spending to one-fifth of the economy—the historical average for spending since World War II. The limit could only be waived if a declaration of war was in effect or by a two-thirds vote of Congress. 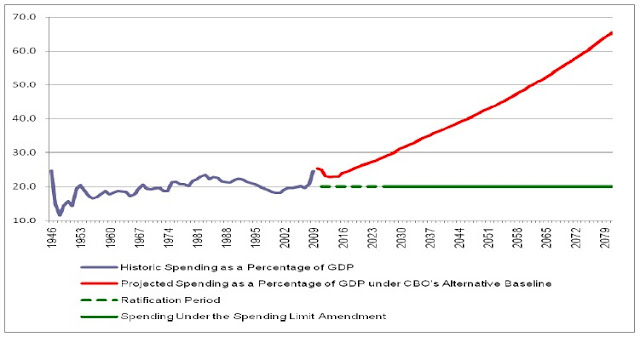 The SLA does not promise a particular spending plan of which programs to restrain and by how much, but rather a Constitutional constraint on lawmakers present and future. As columnist George Will has said, “The Constitution stipulates destinations. It does not draw detailed maps.”

But unless there is first a national consensus of the optimal size of government and its limits, it is clear that lawmakers will not be prepared to address our spending and debt crisis without asking taxpayers to pay more.

The decision to amend the Constitution can never be made lightly. However, the Founders knew that occasionally sands shift and foundations need shoring up, which is why they provided a rigorous amendment process to be used with great deference. Thomas Jefferson himself expressed a desire to amend the Constitution to limit the size of government when he stated, “I wish it were possible to obtain a single amendment to our Constitution, I would be willing to depend on that alone for the reduction of the administration of our government.” Such an amendment’s time has come.
To share or to post to your site, click on the date / link for the post. Please mention or link to us. Thanks! http://arranewsservice.com