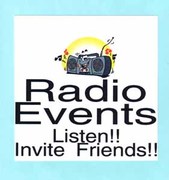 National Fair Tax.org National Spokesman Phil Hinson will be interviewed on the morning program “Underreported with Rick Olivera” on AM 1480 WSAR
At 9:15 AM Eastern time Thursday February 12th....

Pick this up on streaming radio at www.wsar.com
Be sure to listen and hear the latest news direct from the voices of FairTax.org. Also invite quests and friends to introduce them to the Fair Tax.
This announcement is a special service arranged by Jim Thomasik of FairTax Nation and Ken Hoagland, National Communications Director of Americans For Fair Taxation and C. Jason McKinley, National Media Manager for Americans For Fair Taxation at FairTax.org The posting of this information is coordinated by volunteers at Flagler County, Florida Fair Tax Group
Come to this site and look for these announcements often