The new HHS poverty level thresholds were just released and those changes are now reflected in the FairTax Calculator. This year, HHS threw us a curve, but it was easy to deal with. In the past, there was a single dollar amount for an adult and a single dollar amount for a child. So the calculations to determine the poverty level for a family were simple multiplication and addition. But this year, the government thinks that it costs less for each of six or fewer children to stay out of poverty than it does for the seventh. They also think that each child over seven costs even more.

These different poverty levels required some branching changes in the code of the FairTax Calculator, that were not required in the past. They also required some additional explanation. But even so, making all of those changes only took less than an hour. The calculator has been thoroughly tested from 1 adult to 2 adults, from no children to 10 children, and from $30,000 to $250,000 in spending and the numbers all come out correctly.

Check out the 2016 FairTax Calculator here.

I hope that you find it useful. It's an Adobe Flash web widget, so if you want to include it on your own site, just click on the small "i" in the upper left corner of the calculator and it will take you to a page where you can find the embed code for that purpose. Note that in order to embed the widget on a page, you must either control the site or have permission to use either "object" or "embed" code on the page.

I tried to embed the calculator in this post, but FTN doesn't allow either "object" or "embed" code in a post. So here is a slightly reduced screenshot of the calculator, so you'll know what it looks like. Click on the image to get to the real calculator. 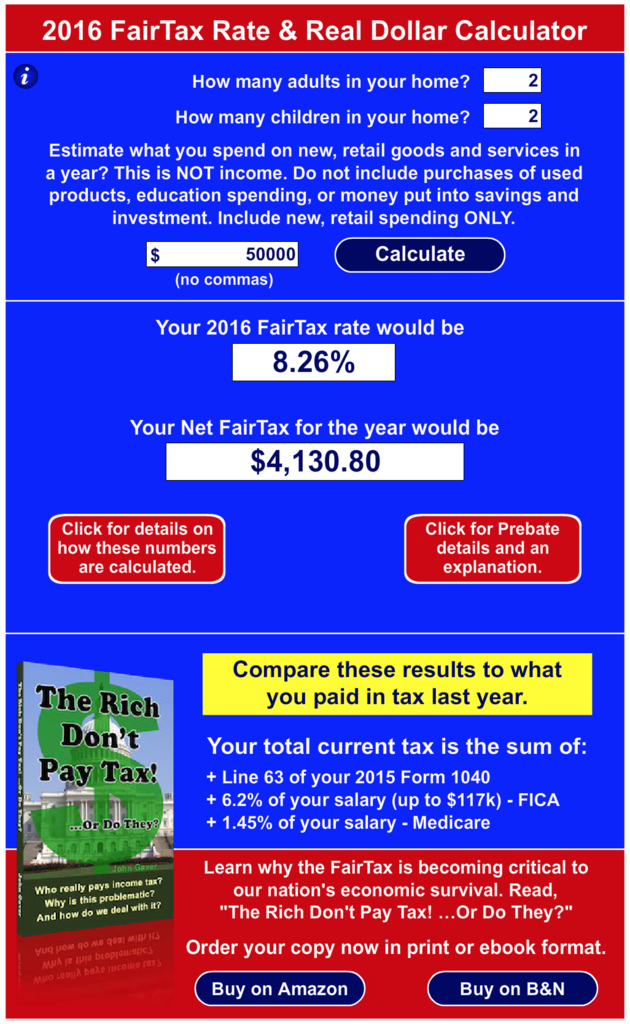