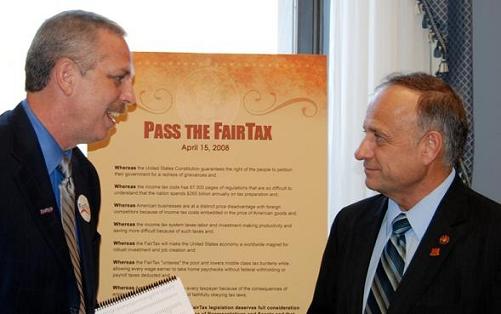 Please tell us how you are helping to spread the word. It is important that FairTax supporters tune in and support this effort by Iowa's US Congressional Representative, Steve King. Contact your own representative and ask them to be part of this discussion even if they are in opposition to the FairTax. UPDATE from Rep. King's Press Sec. Matt Lahr: Right now we anticipate the Special Order taking place around 6 p.m. tomorrow night. Obviously, that could change, but that is the tentative time we are being told. The Special Order will be aired on CSPAN. Congressman King is working to have several other members join him on the floor tomorrow night. House leadership has asked Congressman King to mention President Obama’s plans for tax increases, so the Congressman and other members will be contrasting these planned tax hikes with the FairTax and all it can do to stimulate our economy. I will send around a brief statement from the Congressman on the Special Order later today that you can post online if you would like. Let me know if you have any questions.

Comment by Dan Hunt on March 13, 2009 at 5:59pm
I contacted my Congressman's office(John Larson CT-1) for the last three days to speak with his tax specialist regarding Rep King's upcoming Fair Tax discussion. Each time I was told she was either on another line or away from her desk. I sent her an email but have not yet received a response. This is not surprising since Larson opposes The Fair Tax.

Comment by shannon castleman on March 13, 2009 at 8:13am
anyone know of a Steve King for Pres. site? Can we start one? On the three biggest threats to our nation, he has come out strongly in support of America in all three: Tax reform through FT, real Border Security, and drill, drill, drill. This man needs to be in the WH.

Comment by shannon castleman on March 13, 2009 at 8:11am
I called King's office to say thanks for doing this.

Comment by shannon castleman on March 13, 2009 at 8:10am
I am sending out alerts to radio media here in Atlanta this afternoon and again Tuesday.

RULE, SPECIAL. Also known as a special order, order of business resolution, or rule, a special rule is a simple resolution of the House of Representatives, usually reported by the Committee on Rules, to permit the immediate consideration of a legislative measure, notwithstanding the usual order of business, and to prescribe conditions for its debate and amendment. The authority of the Rules Committee to report special rules can be traced to 1883. Prior to that time, bills could not be considered out of their order on the calendars of the House except by unanimous consent or under a suspension of the rules, which required a two-thirds vote. Since special rules reported from the Rules Committee required only a majority vote in the House, the new practice greatly facilitated the ability of the majority leadership to depart from the regular order of business and schedule major legislation according to the majority's priorities.

In addition to giving a bill privileged status for consideration at any time after the rule's adoption, a special rule establishes the amount of time for general debate on the bill and how that time is to be allocated. Usually the time is equally divided between the chairman and ranking minority member of the committee or the committees reporting the bill. Special rules also provide for the type of amendment process to be followed once general debate has been concluded. Under an open rule, any member may offer germane amendments. Under a close rule, no amendments are permitted. Between open and closed rules are modified open and modified closed rules, which limit the amendment process to only those amendments referred to in the rule. The text of such amendments, who may offer them, and how long they may be debated are often contained in the Rules Committee's report on the resolution. Studies have documented a significant increase, beginning in the 1980s, in the frequency of special rules that restrict the amendment process. This trend has been variously attributed to increasing legislative complexity, member independence, member partisanship, and leaders' desire for predictable results. Special rules are also used to waive points of order against bills or amendments and thereby permit their consideration notwithstanding their violation of House rules. In this regard, special rules are often necessary to waive points of order for matters that would otherwise be privileged for floor consideration without a rule, such as appropriations bills and conference reports.

Special rule resolutions are subject to one hour of debate in the House, controlled by the majority party manager for the Rules Committee. Half this time is traditionally yielded to the minority. The resolutions may not be considered by the House on the same day they are reported from the Rules Committee except by a two-thirds vote of the House. They may not be amended unless the majority manager offers an amendment or yields to another member for that purpose, or unless the previous question (the motion to end debate and proceed to a final vote) is defeated. If the previous question is defeated, its leading opponent is recognized for one hour of debate and the right to amend the rule in a similar fashion.
If I understand this correctly, this is momentous! Too many of our congressional employees either have no idea of what the Fair Tax, are deliberately evading the question, or sitting on the fence waiting to see which way the wind blows. Then, of course, there are those who know what the FT is and don't want to lose the hold the tax code gives them over **our** (not their as they believe) money. This will put it out there in the House so that some will be educated and join us, and force others off the fence. Of course, others will replace them on the fence and there are those who just will not give up the tax code as it is because they think (or know) they can't get re-elected. And it's becoming better known that our congressional employees are more interested in keeping their jobs than doing what is right for their constitutents.

We not only need to educate the public about the FairTax, but also that we **hire** people to be our representatives and that makes them our employees. For far too long, the employer and employee both have forgotten just who is boss and who is the employee who keeps their job as long as they do just that - represent us and keep our best interest at the front and foremost.

I apologize for getting on my soapbox. I'll get off and shut up now :D

Comment by Jim Tomasik on March 12, 2009 at 6:31pm
Linder is aware of it. I do not know anything about contacting boortz. He is an unknown around my neck of the woods.

Comment by Sean Fagan on March 12, 2009 at 5:04pm
As the best voice we have for the Fair Tax, let's not forget to notify Neal Boortz as well. And how about Congressman Linder?

Earl, Right now, it is important that we get the message out that this is in the works.

Dan, You are right. MAke a concerted effort to contact ALL media, even the opposition media.