Share the ATTACK in the "DISCUSSION" section with a breif description for easy referencing.

Thanks EVERYONE together we can give different responses & be ready for the next attack!


As to long-term fairness, Cain's website describes the plan as "Phase 1" in
a progression to adopting the FairTax proposal, which a bipartisan presidential advisory
panel rejected in 2005. The panel found such a national sales tax
would have to be set at 34 percent to produce the same income as the current
system, and would increase the tax burden on middle-income taxpayers while
reducing it sharply on those making over $200,000 a year.


Now we come to the “Fair Tax,” a rather horrible name for a system which
aims to generate all revenue from a single national VAT or sales tax. This would
be equivalent to a 30% sales tax rate, as normally calculated (exclusive
method).

And I think, too, of Mike Huckabee's national
sales tax plan (dubbed the "Fair Tax")—and how it never gained much
traction.

9-9-9 plan and Fair Tax coming? It's already a reality for
Houstonians


With the rhetoric for next year's
presidential election heating up, we continue to hear more about Herman Cain's
"9-9-9" tax plan and other ideas centered on the Fair Tax mantra. Well, I'm here
to tell you that Houstonians are already living the Fair Tax
reality.


The second phase of Cain's plan is
the implementation of a fair tax to replace the 9-9-9 transition. This would
force the parasites of society to contribute to the host body.


The first objection is that the
left will simply run ads that the middle class will pay a sales tax on top of
their income tax. This is a tactic that the left and Democrats have used against
Fair Tax proponents. In the 2004 South Carolina election, Jim DeMint was
attacked for proposing a sales tax on top of an income tax (something that is
not true since DeMint's plan, like Cain's support for the Fair Tax, replaces the
income tax with a sales tax, but that didn't stop the Democrats from running the
ad.

Gary Johnson: A GOP
Candidate Out but Not Down


Tweeting during the debate last
night, Johnson pushed the fair tax, something he’s long advocated. “Cain’s 9-9-9
plan basically phases in the fair tax,” he wrote, in response to the debate
discussion about Herman Cain’s tax plan. “Just implement [that].” Johnson also
tweeted, “I promise to advocate throwing out the entire federal tax system and replace it with the fair tax.”

Herman Cain for Senate? The
Inside Story of His First Insurgent Campaign  Oct 14, 2011


As he does now, he trumpeted a
bold, regressive and probably unfeasible tax plan -- back then, it was the "fair
tax" national sales-tax proposal.

I watched the Ways and Means Committee meeting (back when it happened) concerning the Fair Tax and flat tax proposals. I was disappointed in the juvenile format of the discussion. One particular…Continue

You need to be a member of Defending the FairTax to add comments!

Here is an attack I just responded to by posing the blog here on FairTaxNation:

Is Fair Tax the Answer? by Dr. Bill May

Is Fair Tax the Answer?

We can and will pass the Fair Tax. Its is only the time frame I don't know about it but I am working hard to make it happen ASAP!

The Fair Tax will never happen in our lifetime,

Do you know how long it would take to implement what you suggest?  There at least 37 States with Income taxes that will never go for a sales tax.  It will never happen blah blah blah...

Answer - Go to FairTaxNation.com and at least take an honest look at the plan before you toss it out for no good reason.  This is not a State issue.  It is a national issue.  If a Democratic Congress and President can pass Obama-care in less than two years, surely a Republican Congress and President can repeal the 16th amendment and replace the IRS with a constitutionally limited FairTax in the same amount of time (assuming the GOP wins majority in Congress and the Presidency in November). 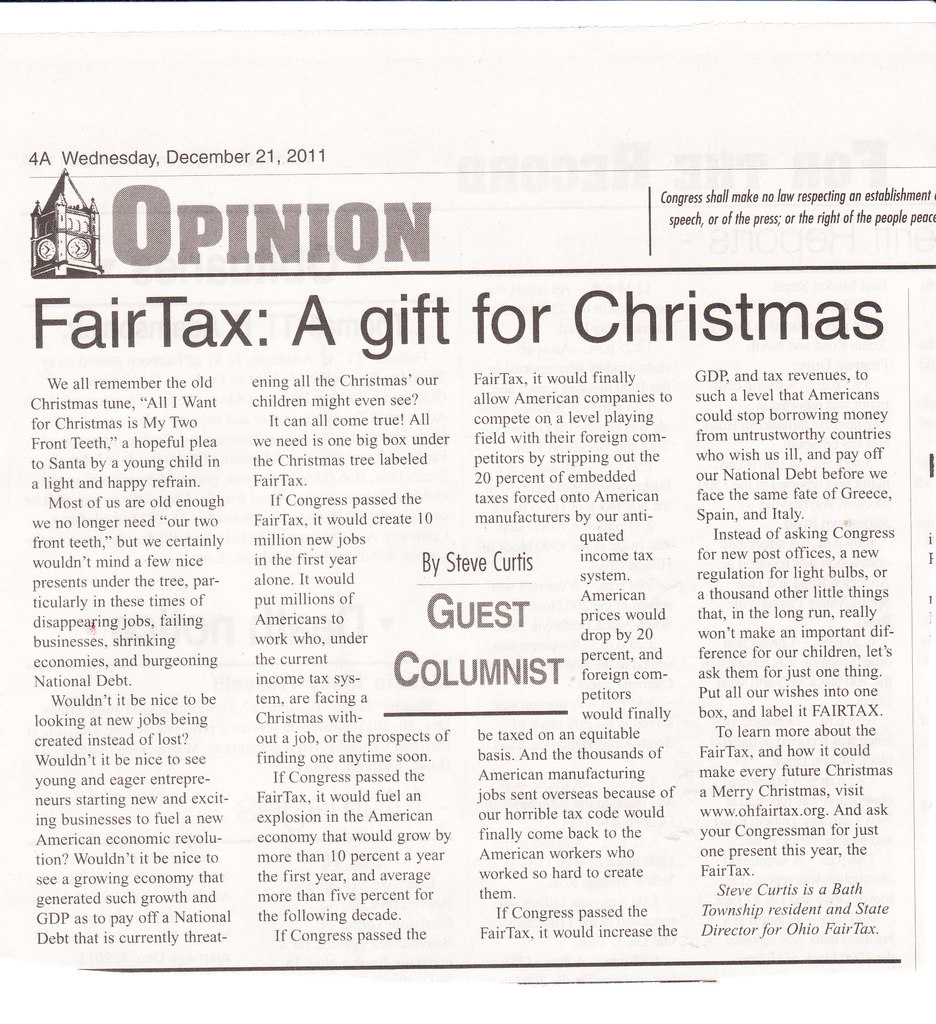 Comment by William Payne on October 15, 2011 at 10:43am
I did see Huckabee on there in one segment, defending the FairTax admirably and pointing out the good parts of 999. 999 is getting lambasted, but I have heard NO ONE explain that it is NOT a 9% tax increase on anybody unless that person spends ALL their income, and unless they spend it ALL on NEW goods. Neither have I heard anyone explain that people can use it as a motivation to save because most people spend too much on luxuries (take, uh, Starbucks, for instance). One $4.50 latte is the tax on $50 worth of new goods (like groceries) a person needs. I even heard one person say that a retiree's SS income would be taxed. What it all amounts to is, people (especially the press) aren't studying either plan enough to know the facts. I hope we can change that somehow.

I just posted stories negative to FairTax (and one good one)

Comment by Marilyn Rickert on October 15, 2011 at 8:24am
If you saw Karl Rove on Fox and Friends this morning, you saw the attacks that have been placed on the FairTax from the right. They have been showing graphis of the Cain "9" plus the state sales tax. Rove also called it a VAT. He completely ignored the reduction in embeded taxes. It was a mess. We have a lot of work to do!


There is no hint as to where those mythical figures came from! Such demagoguery is despicable and totally inexcusable, since DCCC certainly knew that they were misrepresenting FairTax by omitting any reference to the FairTax prebate which untaxes the poor altogether and makes FairTax more progressive than the present I.R.S. income tax system. In fact, FairTax TOTALLY REPLACES all the federal income tax expenses; this lets workers take home their larger paychecks with NO federal withholding to reduce those checks.

The lying ad strongly implies that FairTax would add 23% to current costs, raising taxes by thousands of dollars for everyone but the wealthy. The ad makes no mention of the drastically reduced manufacturing costs under FairTax, nor does it mention that visitors to U.S. and the current trillion dollar underground economy’s cheaters; as they spend their billions of dollars, they helpfully broaden the tax base under FairTax. (Under FairTax no one needs to know how much income you earn.)

The deceitful DCCC ad is evidently working too effectively; it seems to keep Democrats uninterested in the historic FairTax (H.R. 25 & S. 13); of the 70 Congressional co-sponsors of these proposed bills, only one Democrat raises his courageous head. This partisan inequality based on ignorance must change in order to allow such history changing legislation to become reality.

A brief study of 2010 House election results nationwide should quickly convince the Democrats that they had best ignore such disgraceful ads of DCCC and think for themselves to improve their chances of being elected. See from the results that people who understand FairTax come to demand it. And as FairTax becomes better known, we see that the voters have shown that the candidates who advocated FairTax and pushed back against such lying ads actually won their races disproportionately.

Please understand the accompanying election results, and help us make FairTax truly non-partisan! It is simply too great, simple, and fair to allow one party to claim it as its own. (www.fairtax.org)